See Table of Dragons for all the Dragons in the game 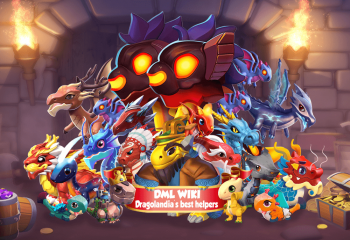 Dragons are reptile-like creatures, the primary feature, and foundation of, the Dragon Mania Legends game. Dragons inhabit the world of Dragolandia, along with many other human characters, found working alongside or against the Trainer.

Each Dragon with a unique appearance is referred to as its own species. There are hundreds of Dragon species. Almost all Dragons can battle against other Dragons, produce Gold, and breed with others to produce more Dragons.

Dragons hatch from eggs and when fed they transition from baby form to adult form, at Level 4. Feeding is the only way a Dragon grows up. Dragons do not age past adult form, they only increase up to a maximum level, meaning they may be immortal. At Level 4, Dragons can be bred, can be trained to improve their skills at the Dragon Academy, and can participate in battle.

The only way for Trainers to get rid of their Dragons is to sell or ascend them. Chronos, Chronoids, and Clan Dragons are the only unsellable Dragons.

There are multiple ways to obtain Dragons. Most can be obtained in the Main Shop, in bundles, or the Dungeon Shop using real or currency, the fastest obtainment method. Though the most common way to obtain Dragons is through breeding in the Breeding Den, the only place where Dragons can mate with one another.

There are several Base Dragons, each embodying a different Element, purchased using Gold from the Main Shop when a certain Player Level is reached. These are the only Dragons that can be purchased in exchange for Gold.

Some Dragons can only be bred or bought during a limited-time period. However, there are many other Dragons that are unbreedable such as Clan Dragons and Boss Dragons, the former attainable only through Clan-related activities and the latter in exchange for Gems after several conditions are met. Many Dragons are won by competing in events, either against other Trainers, the game itself, or as part of a Clan against other Clans. Other Dragons are earned through different battle settings, such as the Bottomless Dungeon, Dragon League and Campaign Map.

Once a Dragon egg is obtained, regardless of method, it must be incubated in the Hatchery until ready to hatch. The only Dragon that does not come from an egg is Chronos, a Dragon that possesses no Elements or rarity and is obtained through a unique method. Eggs not obtained from breeding are found in the inventory

tab, and can be sent from there to incubate in the Hatchery. After hatching, the Dragon needs to be placed in a fitting Habitat, or in the Dragon Vault. The Codex keeps track of all Dragons in possession! and in the entirety of Dragolandia except Clan Dragons, Chronoids, and Chronos.

Dragons obtained through Enchanted Breeding are unbuyable, even if they are present on the Trainer's islands. With very few exceptions, Divine Dragons are also unbuyable. Lastly, Chronos, Chronoids, and Clan Dragons are unbuyable, as well.

Duplicates are two or more of the same species, present at the same time, in a Habitat on any Island or in the Dragon Vault. Except for Chronos, Chronoids, and Clan Dragons, Trainers can have duplicates of the same species. In extremely rare cases, usually during large-scale events, duplicate Dragons in Inventory are taken into consideration as such. Most Dragons acquired through methods apart from buying or breeding, are not able to be bought as duplicates until they are obtained, hatched, then placed in a Habitat or the vault.

Dragons that always can be purchased include:

However, the first three categories of Dragons, and Dragons made available through Breeding Tokens, must first be unlocked as the Trainer progresses through the game. Limited-Time Dragon duplicates whose related event has ended, may only be purchased by tapping their entries in the Dragon Codex tab of the

Dragon Codex, they do not appear through the Main Shop option.

Dragons that can be purchased as duplicates are typically buyable in exchange for Gems. Base Dragons are always purchasable using Gold, while Dungeon Dragons are always purchasable using Dungeon Tokens. There is no limit to how many Dragons of the same species a Trainer can obtain through breeding, as long as that Dragon is currently breedable. Additionally, Card Dragons (obtained only in exchange for matching Dragon Pieces) can be obtained as duplicates, as there is no limit on the holding amount of their matching Pieces.

The Trainer cannot possess more than one of the same species of Boss Dragon unless that Dragon is made available for purchase in a bundle, promotion, or sale. Since some Dragons must be present on islands to purchase a duplicate, those obtained through a method apart from buying or breeding, will most likely never be obtainable again if sold.

Almost all Dragons possess characteristics known as Elements and rarity. These determine their breeding and hatching times, as well as battle and Gold-producing attributes known as stats. There are three different stats for Dragons who possess them; Health, Attack and Gold per Hour. Stats increase when the Dragon increases in level. Clan Dragons, Chronos, and Chronids have no stats, while Boss Dragons possess only the first two stats.

Dragons can be visited in their Habitats by tapping any habitat, then tapping the button of the desired Dragon; this opens the visiting screen which shows a larger image of the Dragon inside their habitat, as well as a collection of information about and functions for the selected Dragon:

Note: A progress bar under its name in the top-left box indicates how many pieces of Food are left for the Dragon to level up.

In the case of a Boss Dragon, pressing its button after selecting its Habitat opens the Boss Info screen which displays:

option or interact with it by giving it a treat through the  Give Treat  button.

All Dragons, in addition to their species name (just referred to as “name”), also have given names. Only Chronos, Chronoids, Clan Dragons, and Boss Dragons have no given name. Given names are randomly assigned to Dragons upon being hatched, but each can be renamed through their Codex Entry and given a different name, limited to eight characters.
There are 306 predefined, randomly assigned names:

This category has the following 47 subcategories, out of 47 total.

(previous page) (next page)
Retrieved from "https://www.dragon-mania-legends.wiki/w/index.php?title=Category:Dragons&oldid=103900"
Category:
Cookies help us deliver our services. By using our services, you agree to our use of cookies.