Clan Siege is a recurring Clan Event in which members of participating Clans complete against other Clans to win points and prizes.

Clan Siege runs for 4 days. All participating, qualified Clans are split into groups of two, in accordance with the league they are currently in.

Members must collect Spellbooks by completing Clan Quests or by requesting them in Clan Chat. Once enough Spellbooks are collected, they must press the 2

button under non-summoned sprites to begin the 3-hour summoning process. The waiting time can be skipped

in exchange for Gems. Each Clan member can summon a maximum of 5 sprites, unless they have an active VIP Status, which increases the maximum to 6.

When Sprites are finished being summoned (ideally all together), members must access the

Siege! button under Clan Siege Sprites, and then select a target. Each Clan Fortress is defended by five towers and the opponent's Clan Dragon. All towers must be destroyed before the opposing Clan Dragon can be attacked. Within each target area, there are three different regions of attack, with varying percentages of hit odds to select from. After selecting a region, the member's Clan Dragon hurls a Sprite at the target to complete the attack. Attack can be done again immediately, or the screen closed to summon more sprites. 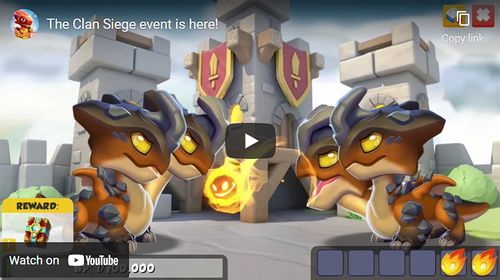 Clan Dragons can wield special powers during events, some improve Clan effectiveness during Clan Siege; thus, it is recommended to activate Amoura, Chip, or Feather before Clan Siege begins. The effect can be improved by earning Power Boosters before an event, by completing Clan Quests to power up the Clan Dragons.

Trainers must be the member of a Clan. Clans can participate only if they qualify by having a fully hatched Clan Dragon.

For the entire duration of the event, the Clan Dragon of the attacking Clan will be strolling near each individual Clan Fortress, occasionally hurling sprites at a Fortress or Clan Dragon. The scene can be switched to see the Trainer's Clan as the attacker by clicking on their Clan's name, or as the defender by clicking on the opposing Clan's name.

For the duration of this event, Clan Quests award Spellbooks

, in addition to their regular rewards. The number of Spellbooks given per quest is randomly generated; thus, no particular amount is bound to a particular type of quest. 3 or 5 Spellbooks can be earned per quest. The Spellbooks and sprites the Trainer currently has appears on the event screen.

In addition to completing Clan Quests, Trainers can request a Spellbook donation in Clan chat once every 3 hours by pressing the + button next to the total amount of Spellbooks, and then pressing the Ask! button. Whenever any Clan member makes a request for Spellbooks, a notification appears in the bottom-right corner of the

tab and is automatically for 5 Spellbooks. Each Clan member can donate 1 to 5 Spellbooks per request, with the maximum limit for each donation set at 5. However, multiple Clan members can donate. Donating is done by pressing the  Donate  button to the right of the Spellbook on the request. Each Clan member can donate up to a total of 40 Spellbooks per day on various requests. Pressing the i button right next to the Spellbook will show the Trainer how many times they donated for that day and how much time is left until the limit for donations resets.

After Spellbooks are collected, Clan Siege Sprites must be summoned before they can be used, and each takes 3 hours to be summoned in exchange for 2 Spellbooks. Once the Trainer has enough Spellbooks to summon a Sprite, they can press the 2

button under any of the unsummoned sprites. All the sprites can be summoned at the same time, provided the Trainer has enough Spellbooks to do so. The Get button will be shown under the slot for the last Sprite if the Trainer's VIP membership is inactive.

The waiting time can be skipped

in exchange for Gems. Each Clan member can have a maximum of 5 sprites at any given time. The amount can be increased to 6 if the Trainer has an active VIP membership. 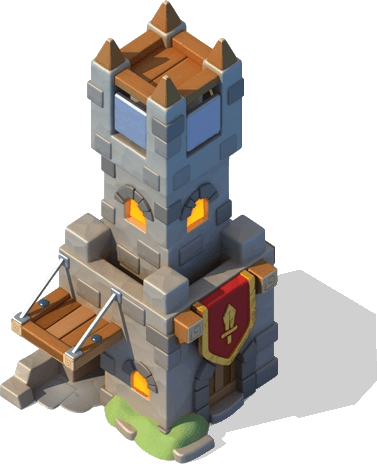 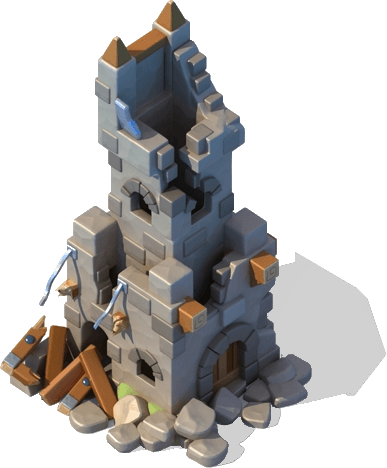 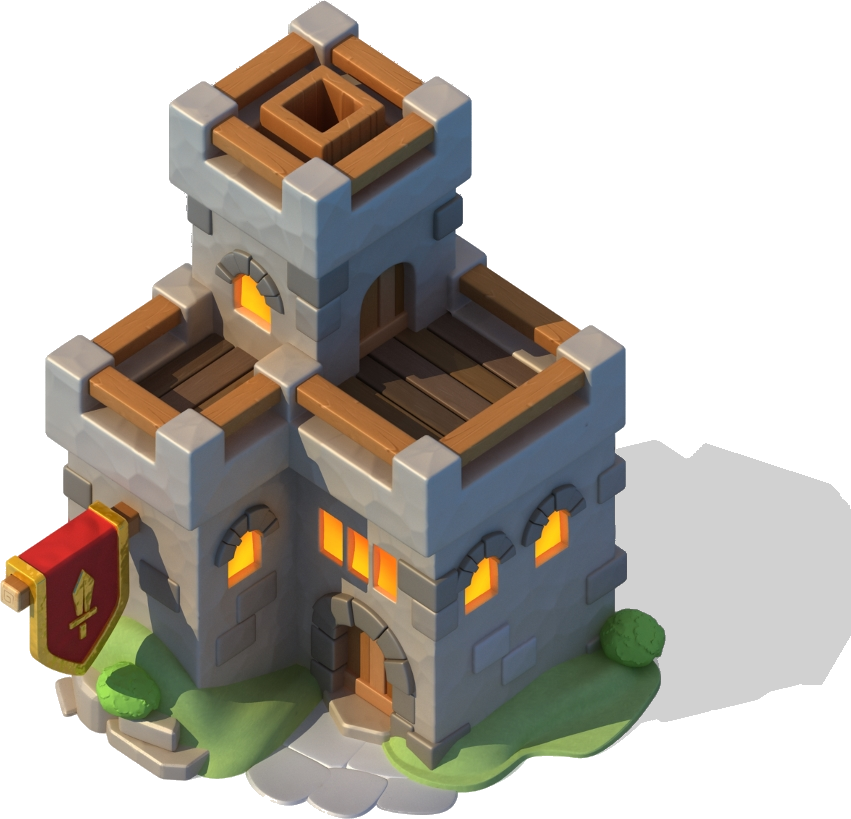 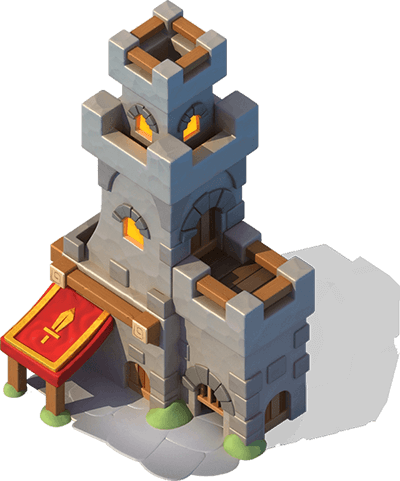 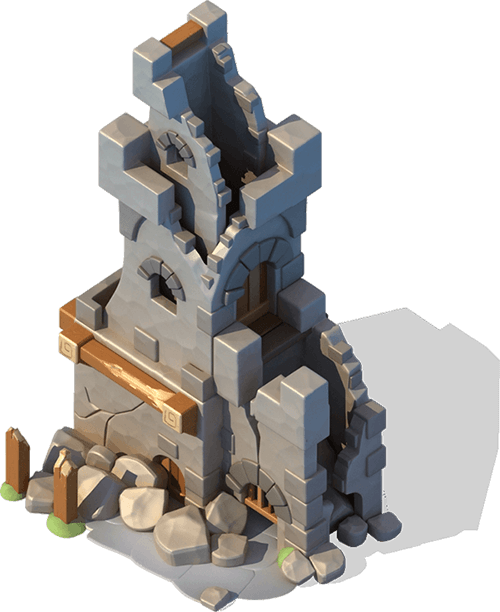 Once a Sprite is summoned, it can be used by the Clan Dragon to attack the opposing Clan's base. Accessing the Clan battle screen is done through the

Siege! button, which is found under the Clan Siege Sprites. Each Clan base is defended by five towers and the Clan Dragon itself.

Once a tower is engaged in battle, the Clan Dragon will be given three different spots at which it can hurl a Sprite. Each spot has a particular chance of being hit. The higher the chance to hit the spot, the lower the damage caused by the Clan Dragon will be. Conversely, the lower the chance to hit the spot, the higher the damage will be. Pressing the Attack! button under any of the spots will use up one of the available sprites. If there are no sprites available, a window will appear, giving the Trainer the option to summon sprites through the Summon Sprites button. The towers can be attacked in any order, but it is mandatory that all towers be destroyed before proceeding to engage the opposing Clan Dragon.

The hit points of the towers depend on the league the clashing Clans are currently in.

Once all the five towers are defeated, the Clan can proceed to attack the enemy Clan Dragon itself. The same mechanics apply to attack Clan Dragons as it does to the towers. However, once the opposing Clan Dragon's hit points are drained completely, its hit points will be fully restored, allowing the Clan to attack it again, to earn a higher score multiplier. Each time its hit points are restored, the amount also increases. At the end of the event, the Clan with the highest amount of damage dealt will emerge victoriously.

The hit points of Clan Dragon are the same across all leagues.

There are three different sources that reward participating Trainers with prizes, namely progress or milestone rewards, the MVP reward, and the victor reward. All three depend on the league the participating Clans are in. Clans in higher leagues will receive better rewards, but the requirements will also be higher.

Each time the hit points of the opposing Clan Dragon are completely drained, each member of the Clan is awarded a certain number of Gems. The amount depends on the league the attacking Clan is in. Once the sixth reward is obtained, the same number of Gems that was given for this reward will also be given each time the attacking Clan defeats the opposing Clan Dragon.

The highest scoring member of the week is awarded

status and a certain amount of Clan Coins, depending on the league their Clan is in. Members can see the current MVP rankings by pressing the

The victor reward is given to the Clan that emerged victorious out of the two, but it is only awarded if the Clan managed to achieve a score equal to the tower with the highest health points. Otherwise, no reward is given to either side. The prize consists of a card pack containing 3 Dragon Pieces for Clan Dragons. The Dragon Pieces that are found in this card pack depend on the league of the winning Clan.

As only one of each Dragon can be owned, the applicable card is automatically replaced with a certain amount of Clan Coins if this occurs. Thus, 50 are given for Ruptia, 125 for Striker, 200 for Gravelis, 350 for Amoura, and 500 for Brimstone, Kutter and Boone.

Retrieved from "https://www.dragon-mania-legends.wiki/w/index.php?title=Clan_Siege&oldid=102003"
Categories:
Cookies help us deliver our services. By using our services, you agree to our use of cookies.