The Ancient Portal is a building allowing the Trainer to travel from the Archipelago to the Campaign Map.

The following function buttons appear when the building is selected:

Upgrading increases the Ancient Portal's level, which determines the base number of

Portal Energy used to Battle on the Campaign Map. Upgrading the Portal costs a fixed number of Gems per level.

To upgrade the structure, select the portal, press the

button, then the Instant Upgrade

button. Each time the Portal is upgraded, both the Portal Energy and the Arena Energy replenish. Portal level does not affect the 'base' amount of Arena Energy, that amount is only affected by VIP Status.

Traveling is done by selecting the Portal and then pressing the

button. Returning from the Campaign Map is done by pressing the X button in the top-right corner of the screen. 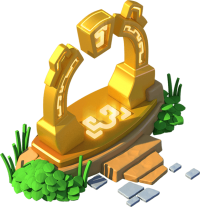 and a golden variant

. The Golden Portal serves no purpose apart from aesthetic enhancement. This option can be used when the VIP Status is inactive.

A single object is moved by pressing and holding it until move options activate, indicated by X

. A moved is cancelled by pressing X.

To move multiple objects at once, with move options activated as above, press

Dragging or tapping does not move objects in Edit Mode, the initial state is selection-only; instead, tapping the

button enables dragging or tapping, the base of all objects turn green or grey indicating if there's enough placeable space to move the items to as a unit.

Retrieved from "https://www.dragon-mania-legends.wiki/w/index.php?title=Ancient_Portal&oldid=98274"
Categories:
Cookies help us deliver our services. By using our services, you agree to our use of cookies.