in order to navigate through each map level as each tile movement will cost a number of Gift Boxes. There is a certain limited amount of Gift Boxes that can be earned within a 6-hour period per task. The limit starts at 200 and increases by 100 after the next reset, every time a level is completed, starting with Level 1, but maxing to 600, totaling up to 3,600 per pool. Each tile step will reward the Trainer with either Food, Gold, or Scrolls. The amount of Food and Gold rewarded depends on the Level Modifier. The total blue tile Gift Box cost of a level is distributed among the different paths inside it. Battles can be fought normally with no cost or can be won instantly in exchange for a certain cost. If a battle is lost, the Trainer can purchase the instant win or wait 30 minutes before they can attempt the battle again.

Dragon Piece. The position of the key is random and can be obtained from any chest. Once a key is obtained, the Trainer can advance to the next level without having to open other chests. Opening all of the chests is necessary to obtain the Cherry Ice Dragon, but not to advance to a new level.

“This winter spectacle gives you Gift Boxes filled with love every now and then.” 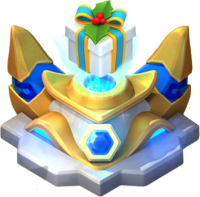 Retrieved from "https://www.dragon-mania-legends.wiki/w/index.php?title=Blizzard_Buddies_(19/12/13)&oldid=83775"
Categories:
Cookies help us deliver our services. By using our services, you agree to our use of cookies.