The Bottomless Dungeon is a Building, owned and run by Otto the Dungeon Master, found on the northwest side of Tycoon Island. Selecting the building opens the Bottomless Dungeon interface, allowing Trainers to complete a series of tasks in Battle, against endless waves of opponents, to obtain currency and other prizes. Each dungeon iteration lasts 6 days and 22 hours, starting Mondays at 9:00 UTC and ending the following Monday at 7:00 UTC. Player Level 16 must be reached to access the building.

The Bottomless Dungeon is accessed by: After selecting accessing the dungeon, the dungeon foyer appears and is the primary dungeon interface. Observed is the (rounded) time left until the Dungeon resets (top-left), the ? and X buttons in the top-right corner, and several smaller panes representing different dungeon features: 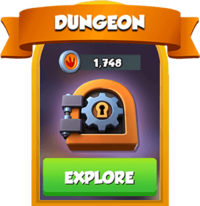 The Dungeon pane serves as an entrance to the Dungeon Map when pressed. The current number of

Stepping Stones earned appears at the top, and the  Explore  button at the bottom.

Stepping Stones are the currency allowing progression through the Dungeon Map to open prize chests.

The Dungeon Map screen displays the time left until the Dungeon resets, and the current number of Stepping Stones and Dungeon Tokens possessed. Trainers progress along a Dungeon Map main path, which eventually leads to a bottomless pink chest. Various side paths are encountered along the way, each providing smaller rewards chests. The Stepping Stone cost becomes more expensive the further the progression is along on the map.

Maps change each week, with two different map (backgrounds) having three cost variations each, for a total of 6 maps of different costs.

Four kinds of chests can be opened in exchange for the number of Stepping Stones indicated when reaching them. The value of the rewards increases with the size of the chest opened. Small red chests, medium green chests, and large blue chests can only be opened once each. The final pink chest, at the end of the map, is the most valuable and is called bottomless because it can be opened an unlimited number of times. Opening the pink chest a certain number of times (number of times varies with each iteration) awards the Bottomless Dungeon Guaranteed Dragon.

Dungeon Tokens as one option, while the other two choices vary to include time-limited Dragons, Stepping Stones, Gems, and other rewards, all which change weekly.

Stepping Stones should be spent before the end of the weekly iteration, as they do not roll over from one event to the next. Remaining Stepping Stones are automatically exchanged for Dungeon Tokens at event end. Dungeon Tokens, on the other hand, remain in the possession of the Trainer.

Occasionally, there are special prizes offered in addition to the Bottomless Dungeon Guaranteed Dragon (such as Divine Event tickets, Ancient Event tickets, or Dragon Pieces).

The Tasks pane displays the Trainer's active tasks, along with the number of Stepping Stones awarded for task completion. During a Brawl, pressing the

Tasks button (lower right-hand side) displays the tasks pane. There are 3 task difficulties assigned randomly throughout the Brawl. Task progress made does not reset at the end of each Brawl in the same dungeon iteration, it carries over to the next Brawl.

The task Defeat Next Dragon is always present and active, whereas the other tasks change randomly. 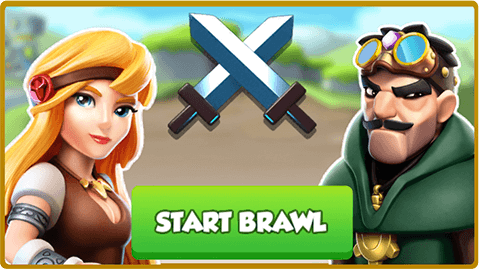 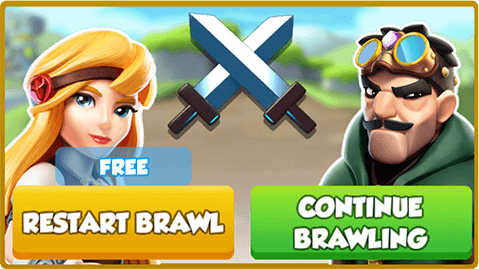 The Dragon Brawl pane displays an image of Arya and Otto, separated by swords, representing the battle to come when one of the Brawl buttons at the bottom are pressed. Pressing the Start or Restart buttons begin a Brawl, where the Continue button continues an already started but paused Brawl. In a Dragon Brawl, the Trainer faces endless waves of opponent dragons; thus, a Brawl cannot be won. The goal of Dragon Brawl is not winning, but rather to fight as long as possible and complete as many Brawl Tasks as possible; doing so allows the collection of as many Stepping Stones as possible. Stepping Stones are awarded on Brawl Task completion and after each opposing Dragon defeat. The points for a KO (Knock Out) get multiplied, ranging from 1 to 3, depending on the level of the Dragon participating in the defeat. Stepping Stones earned carry over into the next Brawl without a reset if occurring in the same dungeon iteration.

The Trainer's 9 strongest dragons (up to 12, depending on VIP Level) are automatically selected for the Trainer's Dungeon Fighter team, while the opponent has an endless supply of Dragons. Once battle ensues, any opposing Dragon defeated is immediately replaced by a stronger one. There is no cap to opposing Dragon levels, the power levels scale from the power level of the Trainer's weakest Dragons to the strongest ones, and can continue to rise beyond that until the Trainer can go no further. When a Dragon on the Trainer's team is defeated, it must be replaced immediately by any remaining Dragon from their Dungeon Fighter team. Replacement Dragons may be selected in any order, and the battle continues until all the Trainer's Dragons are defeated, or the Trainer decides to leave.

The Brawl is paused by pressing the II Leave Battle button, and then either confirming the by pressing the Leave and
continue later button, or ending the current brawl and exiting and/or restarting a new Brawl using the Restart Brawl button. The number of KOs achieved within the Dungeon Brawl displays on the "Brawl Finished" screen.

Once a Dragon Brawl is ended, a new one is started only after waiting the allotted cooldown period. Cooldown times between restarts are 15 minutes after the first Brawl, 1 hour after the second, 3 hours after the third, and 6 hours after every subsequent brawl. When restarting a Brawl, Dragons are fully healed and the power levels of opposing Dragons are reset.

One of 8 pools of Dragons is used for each weekly dungeon iteration. The Brawl starts with the first 3 Dragons, and any defeated opponent is replaced by the next in the list. The following table scrolls ↓ → using touch-gestures. On Computers, hold the Shift key while scrolling to scroll → horizontally.

Every time an opponent Dragon is knocked out, the Knock Out Meter

Fight Bonuses. These come into action when the next Brawl starts and are applied to all the Trainer's dragons.

The Dungeon Shop pane provides an interface and sorting options for all items obtained within it.This shop contains Regular Dungeon Dragons, dungeon exclusive Decorations, and Special Offers (including other Dungeon Dragons) which are purchased in exchange for Yellow Dungeon Tokens. Dungeon Dragons can only be bought after their highest Element has been unlocked.

Dragons that may be purchased outright in the Bottomless Dungeon are typically Limited-Time Dragons that are otherwise winnable in events or occasionally purchasable in the regular Shop; however, there are a few dragons available only in the Special Offer section.

Retrieved from "https://www.dragon-mania-legends.wiki/w/index.php?title=Bottomless_Dungeon&oldid=101628"
Categories:
Cookies help us deliver our services. By using our services, you agree to our use of cookies.