Dragon Grid Events are limited-time competitions in which the Trainer moves their Dragon avatar around the 3x3 grid, attempting to collect Tyrant Tickets and other rewards, while minimizing damaged received to survive as long as possible. 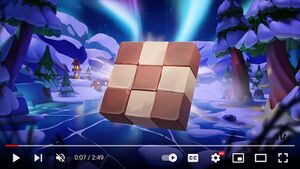 A Fire Dragon avatar, representing the Trainer, appears initially at the center of the game board to be moved where desired. The avatar is controlled by either tapping on, or swiping in, the desired direction. The avatar can also be replaced by the current week's Bottomless Dungeon Guaranteed Dragon, if that dragon is obtained (or re-obtained) during the event. Once obtained, the Dungeon dragon affects the Trainer's starting and maximum Power capacity.

Each Level, the Trainer begins with 20/30 Power which visible at the (inside) top-right of the Trainer's avatar tile. The current power number appears on the left, separated by a slash, by the maximum Power capacity on the right. The count increases, decreases, or remains unchanged, depending on the nature of tiles landed upon (i.e., harmful, or beneficial).

Obtainment of the Dungeon dragon during the event, raises the Trainer's starting Power level to 30, and maximum Power capacity to 40; thus unlocking the dragon as soon as possible may prove helpful.

If too much damage occurs from harmful tiles, and the Trainer's Power hits zero or below, then the current level ends prematurely and the level restarts. When a level restarts, any tickets or chests collected (from the level) are lost.

Harmful tiles are tiles that may reduce the Trainer's power, by the amount displayed at the top-right of the tile, when landed on:

Every chapter, the Trainer begins with one

in inventory, the current inventory count appears at the right of the screen. When used, a Shield completely negates the damage received from one harmful tile. Additional shields can be won by opening chests, though their appearance in chests is very rare.

Each level, containing a series of harmful or beneficial tiles, increases in difficulty as the Trainer progresses; this means traps appear more frequently, and tickets become harder to find. If a level is failed it must be restarted using Energy, which regenerates over time. Completing a certain number of levels is also necessary to unlock the Dragons in the Event's Shop.

Every new level attempt costs a set number of Energy. The Energy count appears at the top-right, and automatically regenerates over time. As the level increases, the energy held increases up to a maximum cap, and its regeneration time decreases.

A set number of Tickets can be found in each Level, and must be found to progress to the next level. At the left of the interface, beside an image of the ticket for that level, appears a current ticket count. The count's first number represents the number of tickets already collected, separated by a slash from the total number of tickets to be collected.

The following 4 pages are in this category, out of 4 total.

Retrieved from "https://www.dragon-mania-legends.wiki/w/index.php?title=Category:Dragon_Grid_Events&oldid=104549"
Categories:
Cookies help us deliver our services. By using our services, you agree to our use of cookies.