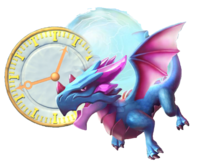 Chronos is a special Dragon, sealed into a statue on top of the Main Island waiting to be set free. It produces no Gold, has no stats, Elements, or rarity, and does not have a Dragon Codex entry. 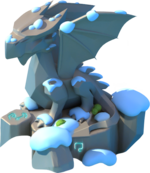 Chronos is named after the Greek mythical being of time. Chronos was encased in pale gray stone and sits covered in patches of undisturbed snow. Its seals lost within each ruin are scattered beneath the statue, either etched into the stone platform, or glowing a faint white or teal depending on whether the relevant seal has been forged. Its posture appears stoic and strong, its large wings held up proudly.

Chronos is freed by exploring the Ruins, and finding and forging the missing shards.

“Chronosian Seals: Reassemble and collect all six seals found in your island Ruins to unleash the great dragon, Chronos the Timekeeper. Together, you'll be able to Decrease Timers!”

The following function buttons appear when Chronos is selected:

“Chronosian Seals are artifacts of tremendous power. Each completed Ruin expedition has a chance to yield a Seal Shard. Collect all shards from each Ruin to wake up Chronos the Timekeeper!”

Six Chronosian seals must be forged, each Ruin has three shards of a certain seal, which must be collected through repeated visits:

See Ruins for complete information about obtaining the seals

Whenever a piece of a seal is found, it affects the appearance of the platform around Chronos' statue:

The current collection of seals (if any are possessed) is accessed by selecting Chronos, then pressing the

button. When all three shards of a seal are collected, the option to forge the respective seal appears.

Forging a seal is done by pressing the

button, pressing the   Forge   button, and then confirming the choice by pressing the    Forge Seal!    button. If a seal has missing shards, the Find This Seal button appears instead, pressing it takes the Trainer to the ruin for which the needed shard(s) are found. Once all the seals are forged, the     Awaken Chronos     button appears after selecting the Chronos button.

When awakening, Chronos' stone body begins to crack, starting with its head. Chronos shakes violently with the force of its unleashing (see video). It glows a brilliant white before finally breaking free, stretching its wings and flying straight up into the air, then returning to its mountain platform and letting out a victorious roar. Chronos remains stationed there for good in its unleashed form.

It now bears the resemblance of a blue Western-style dragon, quadrupedal with a set of wide, magenta wings. Three large claws are observed on each foot, it has two same-colored spikes on its wide muzzle, and several more on the back and sides of its head. Its narrow eyes glow red with white irises, and its throat and belly are coated in large, armor-like, pale pink scales. The end of its tail sports a triangular point. 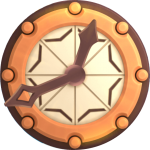 All currently running timers decrease by 6 hours when a seal (except for the last) is forged, regardless of Chronos' level. When Chronos is freed, at its initial level, its powers

decrease most time-involved processes by 6 hours every 4 days. This ability can be used unlimited times, though a cooldown timer appears under Chronos until it can be used again.

Conversely, the timers unaffected are: the replenishing of the Category:Battle Energy, anything related to Clans or Events, Gold production, its own cooldown timer, prizes given in exchange for watching videos and reset times of regularly scheduled items including (but not limited to) Daily Tasks, Daily Rewards, Bottomless Dungeon, Side Quests, and gifting.

button, then pressing the    Unleash!    button. Timers are immediately reduced.

When using its powers to speed up time, Chronos leaps into the air to hover briefly, before with a single flap of its wings begins to perform several reverse aerial flips around the image of a standard clock whose hands move rapidly around it. Chronos lets out a roar in the air before sedately returning to its station at the top of the mountain, its task performed, at which time it must rest to cool down.

After Chronos is unsealed, the seals can be found again and the platform around its statue returns to its initial appearance until the shards are found again. Chronos can be leveled a total of four times, each level decreasing the cooldown time of its power by 12 hours:

Chronos acquires a Chronoid each time the seals are forged again and its powers grow. Chronoids are Dragons that closely resemble their larger counterpart, though there are subtle differences. Their muzzles are noticeably shorter and rounder, and their bodies are stockier. The color of their eyes is the same as but are more almond-shaped, and they have fewer, blunted spikes on the back and sides of their heads. They have pink, armor-like scales covering the front of their throats and bellies, and their short, wide tails taper to a point.

As they fly around Chronos, they leave behind starry purple flight trails. The Chronoids have no power, no elements, no rarity, cannot be used in any way, and serve no other purpose apart from their quantity indicating Chronos' current level.

The following dialogs appear when the

Retrieved from "https://www.dragon-mania-legends.wiki/w/index.php?title=Chronos&oldid=101674"
Categories:
Hidden category:
Cookies help us deliver our services. By using our services, you agree to our use of cookies.