Clans are groups of players who join forces to socialize, to obtain clan dragons, to battle other clans, and to earn Clan-Exclusive Dragons and other rewards.

The Clan Fortress (the physical building South-East of the main island) is the base of operations for Clans. The Clan main screen can be accessed by:

If the Trainer is not in a clan, the Join or Create a Clan option appears, otherwise the main Clan screen appears. 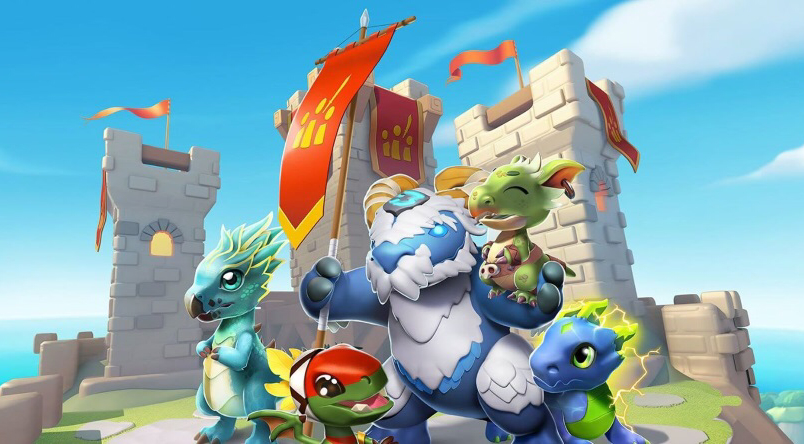 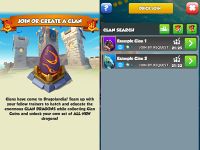 Trainers must be Player Level 25+ to join, or Level 30+ to create a clan; they also can only occupy one Clan at a time. To join or create a Clan, access the clan screen (explained above), then press the

When selecting the Clan crest, the top row shows only Dragons the Trainer currently has, in the order obtained. The bottom row shows only the shields up to and including the highest Clan Level reached (only Level 1, initially).

Clans start out with a maximum of 15 members, once certain Clan levels are reached, the limit increases. There are 15 possible Clan Levels, and increases in Clan Level also provide additional crest choices (both provided in the table below). Clan level is determined by the amount of Clan Experience, earned by members who complete Clan Quests.

Note: More shields are available depending on the league that Clan is currently part of.

Members of a Clan can have various ranks, initially assigned by the leader. Except for the leader, there is no limit to how many other ranks a Clan can have. If the leader leaves without assigning a replacement, the highest-ranking member automatically inherits their position. If the Clan Leader is absent/inactive for a period of 1 month, and there is no active Co-Leader, once a month on a predetermined (unknown) date, the Trainer with the MVP Badge may be promoted one level, until there is an active Clan Leader.

* If Join by request is the clan status

Once in a Clan, the chat panel appears on the left and the Clan details and features appear on the right. The top panel displays clan Details such as current league number, Clan name, Clan message (description), and Clan

experience. Above it, the ? button displays general information about clans.

In the Clan details panel, Leaders and Co-Leaders have access to different Clan settings, depending on their rank. This opens the same window used when the Clan was created, with the clan name greyed out. Additional shields for crests may be available, depending upon the current Clan level.

Below the Clan details panel are buttons for a variety of other clan-related tasks (each outlined below).

The Members List button has two numbers on it, the first represents the current number of Clan members, the second represents the current maximum members. Pressing it provides a list of all Clan members and their information including avatar, Player Level, rank (if any), name, Dragon Collector Points, donations to other players, MVP score (and badge

if present), Clan Power Booster points, the last time the Trainer logged in (depending on their privacy settings), and a more ••• button.

The ••• button on each player's listing provides additional functions:

Ranked members see further functions (depending on their rank):

The Competition Rankings (represented by 1,2,3) button displays rankings as follows:

Clan Dragons are unique Dragons that can only be obtained in, and belong to, a Clan. Each Clan receives an Enigma Egg when the Clan is created, this egg houses Chip, the first of 9 clan Dragons that can be earned by obtaining Card Packs in Clan Events. Each Clan Dragon requires multiple eggs to be hatched, performed though Community Hatching where members incubate and hatch the required number of eggs, before it can be used.

Clan Dragons cannot be placed in Habitats, fought with in individual battles, or sold. Clan Dragons have a Rarity but no Dragon Codex entry, no Elements, and they give no experience nor DCP points. Instead, they have Powers that can be activated before Clan Event start, making events easier, though it cannot be changed after event start.

Clan Dragons can be hatched by pressing the Clan Fortress option and then pressing the Hatch button. When all required eggs are hatched, the image of the Enigma Egg is replaced by the Adult Dragon and its Clan Dragon Powers become usable.

Only one Clan Dragon can be active at a time, and only certain ranks of Clan members can set which is available for a Clan Event. Once a Clan Dragon is hatched, pressing the Clans Collection screen, for an upcoming Clan Event, Trainers can: 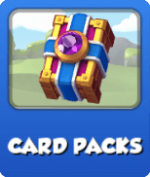 Clan Event Card Packs can only be obtained from The Great Dragon Race and Clan Siege events. There are two types: 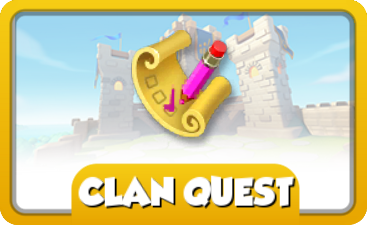 The Clan Quests option provides a list of tasks

individual Clan members can complete between or during Clan Events to earn personal rewards and help the clan. Between Clan Events, Clan Quests earn individual players up to 1,000 Clan Coins per day, unlimited Power Boosters, and Clan experience

During clan events, Trainers are given 5 quest options to earn items needed for Clan Events. Only one quest can be selected at a time, though they can be refreshed, with a wait time, to produce alternate quests. Once the Clan Coins daily limit is reached, quests can be continued for Clan Experience and Power Boosters only.

Clan Experience helps the Clan rise in level, it stops accumulating when the maximum Clan level is reached. Clan Power Boosters are used to Power Up the Clan Dragon. Completing Clan Quests is the only way to earn either, and between 90 and 130 is given of each (though limited events are featured providing double Power Boosters).

There are several types of quests:

The Clan Chat interface appears on the left of the main Clan screen, and is used to communicate with other Clan members. After joining a Clan or as a member, a limited number of past messages remain in chat (50). However, if the screen stays active, the number of retained messages increases until full log-off.

icon if the member is the current MVP.

The color of text is changed by adding a # symbol immediately followed by any number from 1 to 8, then the desired text to color. Messages are limited to 512 characters, and profanity is censored with asterisks. Profanity filtering is enabled or disabled by members of the appropriate rank, who can edit the Clan settings.

During Clan Events clan members can request help from, or help other, clan members through donation. A limited number of event items, earned through the completion of Clan Quests, can be donated to other players.

When a donation request appears in chat, pressing the   Donate   button at the right of the request allows donation. The i button on the request displays how many donations the Trainer has made that day, and how many remaining donations can be made.

If members leave a Clan, their donation counter resets, even if they re-join the same clan; however, Clan Coins are not lost when leaving or switching Clans.

Enchantment Material are requested from Clan members by pressing the

Request Material button in Clan Chat. The Trainer can request either 16 fair or 2 average materials at once every 24 hours. Once sent, the Trainer must wait either until a Clan mate has donated the requested material, or until 24 hours has passed, before a new request can be sent. Donators receive 1 Enchanted Trinket for 1 Fair Material, and 6 Enchanted Trinkets for 1 Average Material in exchange for donation, and can donate up to a maximum of 24 times per day. Legendary, Primal, Divine, and Ancient materials cannot be requested or donated, except for extremely rare special occasions.

If a requestor does not receive all materials asked for, a

notification stays on-screen while scrolling through chat messages. This notification indicates how many people have not received all the items asked for.

When viewing the details of another Clan as a non-member, the following can be seen: Crest, Clan name, Level, current and maximum number of members, language, description, League, status, and a list of current members of the Clan (their name, avatar, level, rank and a ••• button to, depending on their privacy settings, invite/friend or visit their Islands). Non-member action buttons also appear depending on a Clan's membership acceptance status: 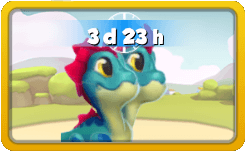 Clan Events are limited-time competitions Clans can participate in only if they have a fully hatched Clan Dragon. Clan members work together to reach milestones, compete against each other and other Clans, to earn rewards. For the duration of the event, Clan Quests give items needed for Clans to progress through the event, in addition to the regular rewards.

Members who joined the clan after an event starts, cannot participate and have to wait until the next event.

Clan events begin on Mondays at 09:00 UTC and end Fridays at the same hour. On rare occasions, these events occur during the weekend.

Clans are grouped into 5 different leagues of approximately the same strength. Each league has several leaderboards, each having a maximum of 100 Clans. Current Clan league affects the prizes and requirements in Clan Events. League also give the Clan several shields in addition to those unlocked through leveling:

Note: Feather Dragon Pieces are only awarded weekly to the top 5 clans of League 5.

Scores are determined in accordance with final leaderboard position at the end. The league leaderboard resets at 23:00 UTC and Clans are promoted and demoted accordingly.

The number of Clans promoted and demoted depends on the league:

In addition to the other membership benefits, Clan members receive a gift whenever another Clan members purchases Gems, during a Gift Giver Event. There are five different gifts if the event, and the gift to be awarded depends on the number of Gems purchased. This event is a promotion made available occasionally for a limited time, usually no longer than 3 days.

Retrieved from "https://www.dragon-mania-legends.wiki/w/index.php?title=Clans&oldid=98250"
Categories:
Cookies help us deliver our services. By using our services, you agree to our use of cookies.