Daily Tasks are a set of daily goals completed to earn rewards, and are also a tab in the To-Do-List. The tasks can be completed throughout a 24-hour period in exchange for rewards such as: Gold, Food, Dungeon Tokens, Enchanted Trinkets, Clan Coins, Portal Gems, Card Dragon Pack Tickets, and either Experience or Season Points if a Dragonmaster Pass event is active.

Daily tasks are accessed by pressing the

button at the bottom-left of the main screen, then selecting the

The Trainer receives 10 tasks per day. The objective of most tasks scales in accordance with Player Level. When a task is completed, a notification pops up in the middle of the screen. 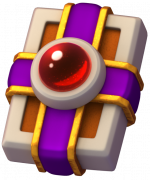 Each task gives rewards on completion based on current Player Level, with Experience starting from a base of 35

*There are 3 entries (at 300 further entries stop displaying and must be paginated). Boss and/or Clan Dragons are not included in this table, please see Table of Boss & Clan Dragons.

Retrieved from "https://www.dragon-mania-legends.wiki/w/index.php?title=Daily_Tasks&oldid=103633"
Categories:
Hidden category:
Cookies help us deliver our services. By using our services, you agree to our use of cookies.