The altar sits upon a circular platform of stone tiles. A row of tiles circles its edge, and in the center is a larger, circular tile carved with a Viking tribal symbol. The altar itself consists of a blue glowing stone basin with upturned feet, flanked on either by two yellow Dragon statues akin to Chinese dragons. Floating between the statues and above the basin is a large circular display of two disjointed rings; one large gold ring rotates slowly clockwise and a smaller teal ring, floating inside of it, rotating counter-clockwise.

The following function buttons appear when the building is selected: 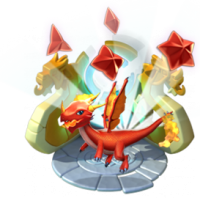 Ascension is a process used to permanently "send back" or trade a duplicate Dragons in exchange for Enchantment Materials. The process unlocks at Level 50, its ascension function cannot be viewed or used before that time. Ascension is done by pressing the

, the Ascend Dragon! button, then selecting a Dragon to ascend and either pressing the No, I want to keep it! button to cancel, or the Yes! Ascend the Dragon! button to confirm. After confirming, the ascension process immediately begins and takes 24 hours to complete, though it can be sped up using Gems.

Only duplicate Dragons can be ascended. One Dragon can be selected from all duplicates currently housed on islands or stored in the Dragon Vault. Duplicates (as determined by the game) always feature those with the lowest Dragon Level and Enchantment Level, the only two factors taken into consideration. When two or more duplicates have the same levels, the displayed one is always given at random. Duplicates in inventory must first be hatched to appear in selection screen. Dragons currently busy with tasks such as breeding, skill training, Elemental awakening and so on, appear in the selection screen but are not eligible for ascension until free.

Since ascending a Dragon is an irreversible process, the same as selling, the ascended Dragon is permanently removed from the Trainer's game. Simplified rules for ascension are accessed by pressing the ? button.

The materials given match the Elements of the ascended duplicate.

When ascension finishes, a

icon appears above the Enchantment Altar. Selecting the altar provides a chest

containing between one and three

material cards. In the case of Divine and Ancient Dragons, a separate

material card is given for Divine and Ancient Elements, respectively.

The number of material cards, and the quantity of Enchantment Materials depend solely on the rarity of the Dragon, and whether it is marked with

in the selection screen. No other factors are taken into consideration. The rarer a Dragon is, the higher the chance that more and higher-quality materials are given.

mark. Dragons with inactive Elements need not have their secondary Elements awoken to count for ascending.

The following article is in development.
***The information may be incorrect or incomplete, and may change without warning.***

Fusion is an irreversible process through which identical Enchantment Materials of the same grade and Element are merged to obtain materials of a higher grade. A predetermined number of lower-grade materials and Enchanted Trinkets are necessary for fusing. The costs vary in accordance to material quality and Element.

Ascension time can be reduced by selecting the Enchantment Altar, pressing the

button, then pressing the Skip All

button to pay the number of Gems required to skip the remaining time.

Outside the Altar, ascension time can also be reduced through forging Chronosian Seals or activating Chronos's power, actions which reduce several timers in the game by 6 hours.

The Enchantment Altar is part of the mountain on the Main Island, as such, it cannot be moved, stored in Inventory

Retrieved from "https://www.dragon-mania-legends.wiki/w/index.php?title=Enchantment_Altar&oldid=102517"
Categories:
Cookies help us deliver our services. By using our services, you agree to our use of cookies.