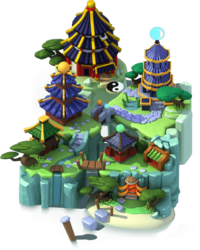 The Island of New Beginnings was a small, Divine Island located south of the Main Island that was only visible between the 16th of February and 19th of March 2018. The island could also be accessed through the

button located at the bottom-right corner of the screen. According to Professor Hogwin, the island had risen from the sea so the Divine Dragons could battle any challengers, believing that the more battles they won, the more luck they would have in the coming year.

The period of time during the appearance of the island was split into three chapters and an epilogue. Accessing the island displayed several menus, the time left for the current chapter, its main prize Dragons, and a shadowy preview of the next chapter (in the last chapter, the preview was that of the Epilogue). Various Dragons, such as the Dragon of the Month or some from bundles, although independent of the island and its events, were also displayed among these rewards, even though the method of obtaining said Dragons remained the usual one.

The Calendar Event was spread across all three chapters and only ended in the Epilogue.

Through this button, the Trainer could access the ongoing Calendar Event. The option had the same function as accessing the event through its banner from the list of current events. The button displayed the current day for which the prize had already been claimed and the total number of days the calendar had. If the

sign was present on the button, it meant the current prize had already been claimed.

The main features of the first chapter were the Divine New Year and Dragon Dynasty events. The former event was split into 12 levels, and offered as prizes such as: Gems, the Ba Jiao Gui Dragon, the Nezha Dragon and the Taiyi Zhenren Dragon. Where the latter offered several prizes across a period of 21 days, with the main prize being the Erlang Shen Dragon. The Calendar Event continued into the second and third chapters.

“Grants you beautiful hand-painted Divine Tickets every so often.” 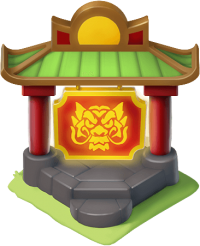 The Divine Ticket Booth was the first Ticket Generator introduced. This particular generator produced Divine Tickets at 1 per 4 hours, and it held a maximum of 6 tickets.

The main features of the second chapter were the first Divine Chest, first Boss Challenge and the Dragon Dynasty event, the last having started in the first chapter. The Divine Chest offered the chance to obtain several prizes, such as decorations, Dragon Fury Essences and Dragons, while the Boss Challenge offered the Sunrise Dragon as its main reward, once it was completed. The Calendar Event continued into the third chapter.

The main features of the third chapter were the second Divine Chest, second Boss Challenge and the Dragon Dynasty event, the last having started in the first chapter. The Divine Chest offered the Trainer a chance to obtain several prizes, such as Gold, Food and Dragons while the Boss Challenge offered the Moon Rabbit Dragon as its main reward, once it was completed.

The second Divine Chest was a continuation of the first, having the same mechanics and even the same prizes, except for the Dragons. 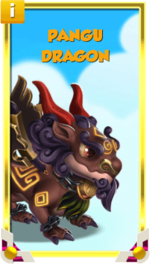 In the conclusion of the Island of New Beginnings, namely the Epilogue, the only feature available was breeding the Pangu Dragon, who was available as the Dragon of the Week between the 12th of March and 19th of March. The main interface displayed a window with the Pangu Dragon and in the top-left corner of that screen, the i button could be pressed to display the Codex Entry of the Dragon. In the middle of the screen, the Breeding Den along with the Fairy Dragon and the Fire Dragon, the parents of the Pangu Dragon, were shown. Underneath them, the Go Breed! button was available and pressing it took the Trainer to the Main Shop.

Retrieved from "https://www.dragon-mania-legends.wiki/w/index.php?title=Island_of_New_Beginnings&oldid=103897"
Category:
Cookies help us deliver our services. By using our services, you agree to our use of cookies.