“And here you are on a peaceful, yet mystical, pasture. The air is tense, as if there were constant magical tremors flying over the quiet field. The presence of something powerful is perceptible.”

Mystic Pasture is a type of special event available only to Trainers who have not logged into the game for a period of 2 weeks or longer. The event is intended to refamiliarize the Trainer with certain game features by assigning different quests. Each quest is found within a tile on a trail path. Unlike events in general, Mystic Pasture is not level locked, the only requirement is to have completed the initial game tutorial. 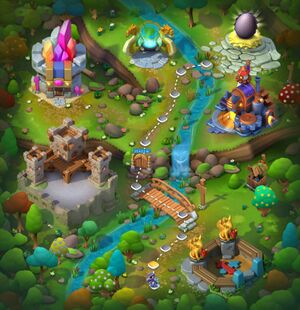 The event is available over a period of 5 days, but the quests are separated in half by a gate in the middle of the map, which opens only after the first 24 hours have passed. Each quest gives Gold or Food, and the objectives require the collection of Gold from Habitats, both of which scale based on current Player Level.

There are ten different quests, out of twenty-one possible, that are received to complete the event.

Retrieved from "https://www.dragon-mania-legends.wiki/w/index.php?title=Mystic_Pasture&oldid=97731"
Category:
Cookies help us deliver our services. By using our services, you agree to our use of cookies.