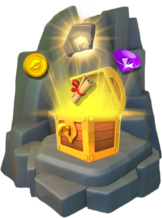 Ruins are abandoned structures on or near some islands. There are 6 different ruins to explore using Dragons. Exploration is the only way to obtain shards for Chronos, and it also earns other prizes. Each Island and its associated ruin must be unlocked before the Trainer can explore it. 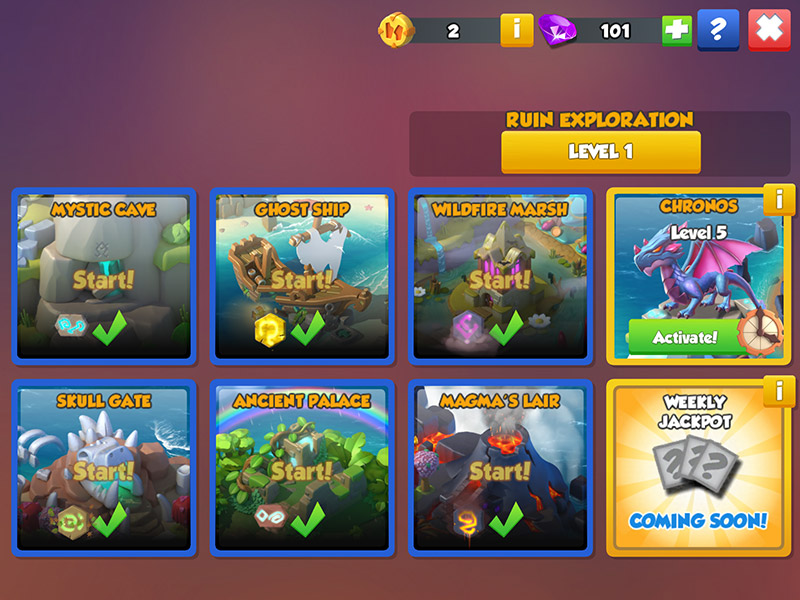 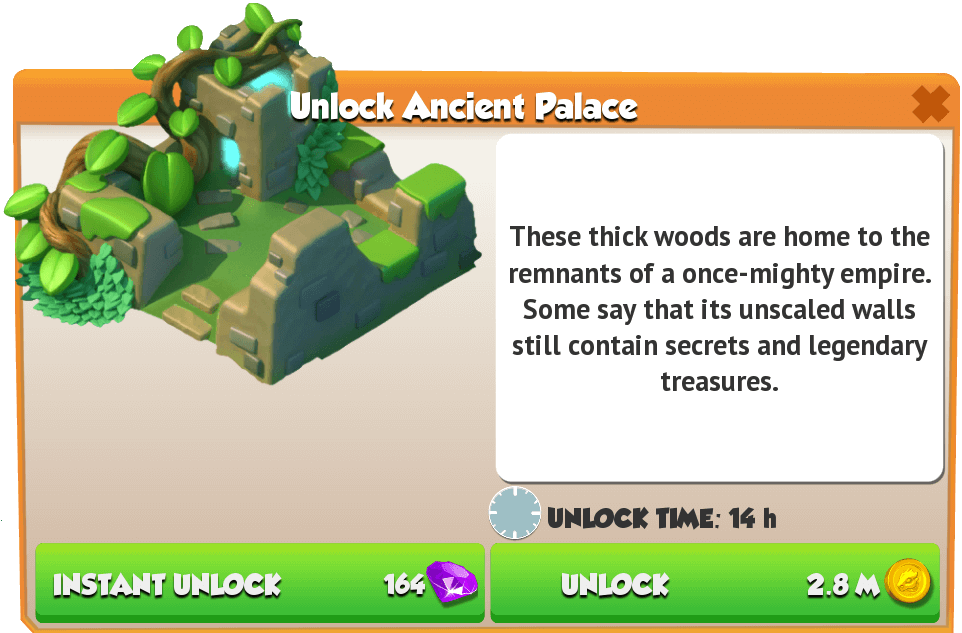 Selecting any ruin opens the Ruin Exploration window. Presented are buttons for each of the 6 ruins, the current ruin   Level 1   (level) button, Chronos, the Weekly Jackpot, and ? button for brief tutorial Dialogs. Locked ruins display a lock icon

at the bottom-right of their button.

Each ruin is level-locked, a certain Player Level must be reached and unlocking done before exploration can commence. Accessing the Ruin Exploration window, selecting the desired ruin to unlock, and then paying the required Gold unlocks it after a set time passes. Gems can be used for instant unlocking (each island having a different unlock cost). 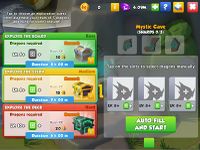 Pressing the button of any unlocked ruin, opens the exploration window for that ruin, providing corresponding ruin exploration options. On the left are exploration quest difficulties easy, medium, or hard. Each level of difficulty displays the rarity and level of Dragons required, rewards obtained, required time, Ruin XP

earned, and a ruin chest for exploration. Each visit requires the selection (or auto-selection) of three Dragons, meeting the minimum requirements.

On the right is an image of the shards to be found, 3 Dragon slots to fill, and the Auto-fill
and Start button below them. Auto-fill and Start auto-selects 3 Dragons meeting the exploration criteria, and commences exploration (using the last used difficulty selection, unless another difficulty is first tapped). Alternatively, Dragons may be manually selected by tapping any empty slot to open the Dragon selection window. A Feed button appears in the Dragon selection window below Dragons that don't meet exploration criteria. Selection of a Dragon fills that slot and returns to the previous screen. Any slot currently filled can be tapped again to select a different Dragon. If Dragons are manually selected, the Auto-fill
and Start button changes to a Go! button after slots are filled, and pressing it commences exploration.

The higher the ruin exploration quest difficulty, the stronger the Dragons each quest requires, but they also yield bigger bonuses and are quicker to explore. During exploration, Ruin XP is earned, which levels up ruins automatically when a certain threshold is met. Information about the current ruin level (and the next) are accessed by pressing the current   Level 1   ruin level button.

Ruins have set times required for exploration, regardless of ruin level:

Outside of Ruins, exploration time can be reduced through:

Ruins Exploration time is influenced by use of the

Relic of Exploration, which is only usable by selecting a Ruin to open the Ruin Exploration screen, pressing the   Skip   button, and then confirming the choice. Once activated, the relic decreases the timer of any one ruin exploration by 8 hours.

The amount of Ruin XP

required; pressing   OK   returns to the previous screen. The total Ruin XP required per level is:

As ruins are leveled, the Dragon levels and rarities required to continue exploring also increase. Exploring a particular ruin cannot be done until Dragons fulfilling its criteria are obtained. For example, if a Trainer gets promoted to a new ruin level and has Dragons that meet the Rarity criteria but not the Level criteria, they cannot explore that ruin, and need to feed their Dragons to meet the criteria.

After any ruin exploration is complete, a chest icon appears above all, and pressing it opens the Ruins interface, where the prizes are collected. Each chest may contain Gold, Food, (possible) Gems, Ruin XP, a chance to win the Weekly Jackpot prize (if there currently is one), and a chance to get a shard. Shards are used to unleash Chronos, and once unleashed, the seals can be obtained again to level up Chronos and summon Chronoids. Only a successful exploration can result in a chest containing a Chronosian Shard.

The amount of Ruin XP rewarded depends on the ruin and on exploration quest difficulty:

The chests have different prizes, whose quality increases with the level of difficulty previously chosen. Each chest has an i button that can be pressed to access the Possible Rewards screen, showing the possible rewards, the chance to win the Weekly Jackpot (if there is one), any possible shards to collect, and an ok button to exit the screen.

Possible Food, Gold, and Gems rewarded depend on Ruin level, and difficulty:

Chronosian Seals were long ago lost in the ruins, each broken into 3 pieces that are only found during exploration. Shards that can, or have been, collected are seen at the top-right of each individual Ruin's exploration screen, or all can be viewed concurrently by tapping the Chronos button or the i button at its top-right corner.

Each time a Shard is found, all running timers on the Islands are decreased by 45 Minutes. Once all 3 shards for each seal are found, they are forged back into 6 separate seals. When all 6 seals are collected, Chronos is unsealed from its stone statue and begins decreasing timers whenever its power is used.

Each Chronosian Shard has a different drop rate, depending on the ruin, the Chest difficulty, and the part itself.

The Chronos button allows the full collection of seals to be viewed. When tapped, the seals that need to be collected, need to be forged, or have been completely collected and forged appear. A Find This Seal button appears below seals not yet collected, sending the Trainer to the corresponding ruin. A green checkmark

appears on seals collected and forged. A Forge! button appears on seals when its shards have been collected, but still need to be forged into a seal. Pressing the Forge button provides the Trainer with a Restore Chronosian Seal dialog featuring an image of the seal when made whole, as well as a Forge Seal! button, used to confirm forging the seal.

The following are a list of Weekly Jackpots that have been featured as extra potential Ruin prizes.

Occasionally, a Milestone Reward-like event is started for the Ruins, where Trainers can earn rewards by collecting Ruin XP points.

The following dialogs appear when the ? button is pressed:

The following 6 pages are in this category, out of 6 total.

Retrieved from "https://www.dragon-mania-legends.wiki/w/index.php?title=Category:Ruins&oldid=98376"
Categories:
Cookies help us deliver our services. By using our services, you agree to our use of cookies.