Ruins-Pre 5.7 were completely reworked. This information is no longer valid, but is kept for historical purposes. See Ruins instead. 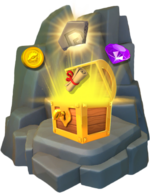 Across the various islands, there are six different ruins which can be explored by Dragons for various treasures. Each ruin has to be unlocked before the Trainer is allowed to explore it. Exploring ruins is the only way to obtain shards for Chronos.

Once unlocking the ruin is complete and after selecting it, the

option is made available and can be pressed to open the selection window where the Trainer can see the level requirement for Dragons, the recommended Dragons for exploration, the rewards that can be obtained from exploring the ruin, the time it takes to explore the ruin, and (unless already found) the seal that can be obtained from the ruin as well as the number of shards the Trainer has collected thus far. The recommended Dragons will always be shown at the top, sorted by their level. The Trainer can choose the Refresh option to refresh the list of recommended Dragons, the Feed option to level up any Dragon on the list that does not meet the required level, the

button to filter Dragons by Element (the default view is

button to find a Dragon by their name, or the Explore! option to start exploring the ruin, provided the requirements for exploring have been met. Once exploring has commenced, the time left until exploration is finished will be shown in a bar over the ruin. During exploration, when selecting the ruin again, the Trainer will have the same button for accessing the ruin and the button to skip

the exploration time in exchange for Gems. Pressing the former button will open up the ruin screen displaying the time left until the ruin is finished, the current Dragons exploring it, and the Skip

option. Both this last option and the skip option outside the ruin will bring up a confirmation window Skip All

button for the Trainer to confirm their choice. 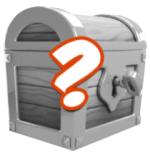 Before exploring a ruin can commence, it must be unlocked by selecting it and pressing the

option, and then pay the necessary cost. Additionally, aside from needing to be unlocked in exchange for a certain cost, each ruin is also level-locked and the Trainer must reach certain levels before being able to unlock a particular ruin.

Each ruin takes a certain amount of time to explore, and the exploration time can be skipped using Gems. Each visit requires a different selection of any three Dragons to be used and there is a minimum level required for each visit which can gradually increase after each exploration. The maximum level requirement does not increase beyond 30 which is applicable to all ruins. When it reached 30 the dragons needed to explore the same ruins changes to a different set. If desired, the list of recommended Dragons can be refreshed using Gems. The selection of recommended Dragons is not based on the Dragons the Trainer has in possession, and changes after an exploration only if the exploration was successful. Otherwise, the selection stays the same until such condition is met. Whenever the current selection of recommended Dragons is refreshed, the same set of Dragons will not be shown again. For non-VIP Trainers and those with VIP Levels 1 or 2, this will always be the case. However, Trainers with higher VIP levels have the benefit of several free refreshes available for use each day; one/day for levels 3 and 4, two/day for levels 5 to 11, three/day for levels 12 and 13, four/day for levels 14 to 16, five/day for levels 17 and 18, and six/day for levels 19 and 20.

After a ruin has been explored, the

icon will be shown atop it and pressing it will either give the Trainer a No Chest prize (in case of an unsuccessful exploration) or the chance to spin    spin!    for one of three chests (in case of a successful exploration). Each chest can contain Gold, Food, Gems and/or Scrolls. There is no way of knowing what will be obtained from each visit. Each ruin has three shards of a Chronosian Seal, which can be obtained in addition to normal rewards. These are used to unleash Chronos. Once Chronos is unleashed, the seals can be obtained again to level up Chronos and summon the Chronoids. Only a successful exploration can result in a chest containing a Chronosian Shard.

, and the chance to get any of them depend on said rarity.

Each Ruin has eleven different chests, and each chest has a fixed reward. The No Chest prize for not getting a chest is also fixed, but the Trainer will either receive one of Food or Gold and not both at the same time. The chest that a Trainer will receive is pre-determined even before spinning for it, as the chest in the right of the pointer arrow will always be the one awarded to the Trainer.

Each Chronosian Shard has a different drop rate, depending on the ruin and the part itself. 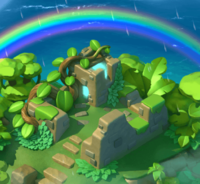 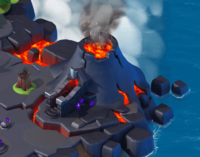 Mystic Cave is the first ruin found in the game and is located on the Main Island. It can be unlocked at Level 10. It is the only ruin required to explore to progress further.

Ghost Ship is the second ruin found in the game and is located near the Main Island. It can be unlocked at Level 15.

Wildfire Marsh is the third ruin found in the game. It can be unlocked at Level 18 after purchasing Distant Marsh.

Ancient Palace is the fourth ruin found in the game. It can be unlocked at Level 20 after purchasing Lost World.

Skull Gate is the fifth ruin found in the game. It can be unlocked at Level 22 after purchasing Faded Earth.

Magma's Lair is the sixth and final ruin found in the game. It can be unlocked at Level 24 after purchasing Magma's Land.

Retrieved from "https://www.dragon-mania-legends.wiki/w/index.php?title=Ruins-Pre_5.7&oldid=98185"
Categories:
Cookies help us deliver our services. By using our services, you agree to our use of cookies.