Sigils are a magic-infused symbols added to Dragons to grant them extra powers in battle. Sigils are unlocked at Trainer's Level 20, and provide a way to fine-tune a Dragon fighting team's abilities. 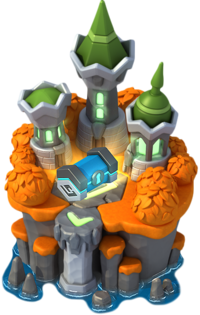 Sigils can be obtained by collecting the daily key provided by the Sigil Tower. After 3 keys are obtained, a Sigil Chest can be opened, which typically awards 3 Sigils and an amount of Sigil Trinkets. Sigils can also be obtained by completing battles on the Sigil Campaign Map and obtaining 3-stars in battle.

There are fifteen Sigils in total across three different categories called Schools. These Schools are the School of Growth, the School of Power, and the School of Shelter. Each School contains five Sigils, each with its own unique powers. 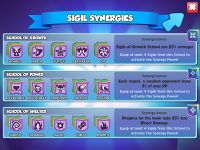 The different Sigil Schools can also provide an additional boost to your team. Equipping four Sigils of the same Sigil School across the fighting team activates a Sigil Synergy which will provide one of three different effects for the whole team:

School of Growth: Boosts the effect of all equipped School of Growth Sigils by 25%.
School of Power: Each round, a random opponent receives damage equal to 8% of its max HP.
School of Shelter: Reduces direct damage taken by 25%.

The power of each Sigil can have a significant effect on Battle and the selection of Sigils should be carefully thought out, not only to enhance the team but also to consider the creation of Sigil Synergy.

All Sigils have different MAX HP and damage bonus percentages based on their rarity. The bonuses per rarity and Sigil are as follows:

Equip Sigil, and then tapping Change

Change. Next tap the Sigil you wish to equip in its place, and then tap the Equip equip button. The cost of changing a Sigil is the same as for removing (unequipping) and linked to the rarity.

To obtain rarer Sigils, Trainers will need to fuse lower-quality Sigils together. Through Fusion, a Trainer can combine multiple copies of the same Sigil into a single, higher-quality version. This process removes the lower quality trinkets in the process of fusion into the higher-quality Sigil.

according to the rarity of the Sigils. To unequip a Sigil, tap your Dragon to visit its Dragon Infoscreen. Next, tap the

Equip Sigil. On the Equip Sigil screen, tap the Unequip

Unequip button and the Sigil will be removed from your Dragon.

Retrieved from "https://www.dragon-mania-legends.wiki/w/index.php?title=Sigils&oldid=103562"
Categories:
Cookies help us deliver our services. By using our services, you agree to our use of cookies.