This article is about quests on the Campaign Map. For other uses, see Quests (disambiguation).

On the Campaign Map there are five types of quests: Main Quests, Side Quests, Boss Quests, Rusty Gates, and Mines. Quests must be completed, with at least one star, to advance through the map and open new areas. Completing a quest results in various rewards based on the type of quest and the number of stars earned in the battle.

See Normal Quests and Heroic Quests for a complete list

Main Quests travel along a path through each island, and each quest must be completed to advance. These quests are indicated by a round gray button

, and once completed, the button turns green

. Main Quests may be repeated once beaten with three stars, but give lower rewards and exclude Scrolls and Food.

Main Quest rewards can include Gold, Food, Scrolls, and experience points based on the number of battle stars achieved. Beating Quest 116 and Quest 205 in Heroic Mode rewards the Trainer with Steampunk Dragon and Bighorn Dragon, respectively.

On the Campaign Map, Side Quests are repeatable quests that branch from the main path. They are only reached after clearing the Main Quest which it is attached to, namely the one it shares the pre-decimal number with, or by unlocking the Rusty Gate that leads to it. Multiple Side Quests on the same path will have the same pre-decimal number with sequential decimal numbers (example: 26.1, 26.2, 26.3). After some or all available Side Quests are beaten, a limited number of these quests refresh automatically after approximately 2 hours.

Side Quests have a square with crossed swords on it:

The square is blue and has a

icon over if not yet completed.

The square is gray if there is an uncompleted blue square before it on the path. The blue square must be beaten first to unlock the gray one.

Once a Side Quest is beaten, the square turns green and shows stars obtained during battle.

Side Quest rewards can include Gold, Food, Scrolls, and experience points based on the number of battle stars achieved. One Scroll is awarded only if the Trainer earns three stars in the battle.

Rewards set when the Side Quest(s) become(s) active again, are 30% of the total rewards obtained on the latest progress step on the Campaign Map. In other words, the further the Trainer is on the Campaign Map, the higher the rewards of Side Quests will be. Dragons encountered the first time a Side Quest is fought, as well as Dragon levels and skills, are the same for everyone. Starting with the first refresh, the opposing Dragons vary over time and are generated randomly, while their levels are adjusted based on the levels of the Trainer's Dragons.

Periodically, on the Main Quest path, two types of Boss Quests are encountered.

Minor Boss Quests have a large white button with the Boss symbol, and are more difficult battles meant to prepare fighters for tougher upcoming battles. Starting from the sixth island, most of these quests consist of two waves of Dragons.

Major Boss Quests have a large white button that has the red Boss symbol as well as the Boss Dragon that must be defeated sitting atop it. This quest's Boss Dragon must be battled and defeated to move on. Once the Boss is defeated in Normal Mode, it is immediately available for purchase, and the next quest on the main path opens.

Minor Boss Quest rewards can include Gold, Food, Scrolls, and experience points based on the number of battle stars achieved.

Major Boss Quest rewards include the Boss Dragon becoming available for purchase as well as possible Gold, Food, Scrolls, and experience based on the number of battle stars achieved.

Rusty Gates are places on the Campaign Map unlocked either with help from friends, by pressing the  Ask Friends  button once the closed gate is selected, or by spending 5 Gems per slot. When the conditions for opening a gate are met, the

appears atop it, indicating the gate can be opened. Certain Side Quests and mines can only be accessed by opening these gates.

There are 31 Rusty Gates in Normal Mode, whereas in Heroic Mode there are only 20. This is because mines are not available in Heroic Mode, and gates that are not included all lead solely to mines. Each gate is unlocked after beating the quest it is attached to. Once a gate is open, it remains open. 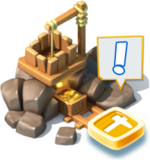 Mines provide a regular source of Gold while controlled. These are unlocked while advancing through the Normal Mode on the Campaign Map. There are currently 37 mines in total.

icon above it. The button and exclamation point indicate that the enemy has possession of the mine. To gain control and utilize the mine for Gold income, the occupying Dragons must be defeated.

After winning the battle, the button turns green, and the exclamation point disappears. At this point, the mine becomes accessible and begins generating Gold.

Mines have a Gold production rate and a maximum Gold capacity, which vary according to each mine. When the mine is in possession of the Trainer, Gold is collected by pressing the

icon when available, namely at 50% or more of its current capacity. Otherwise, it is collected at any time by pressing the

button inside the mine's informational window. If the mine is retaken by the enemy, all Gold produced while in the Trainer's possession is not lost and the Trainer is given the option to claim it.

Mines are retaken by enemy Characters after a minimum of 48 hours, and must be successfully defended to maintain a claim on them. Each time mines are retaken, they stop generating Gold and the enemy uses different Dragons to defend them. The rewards given, and the Dragons encountered the first time a mine is fought, as well as Dragon levels and skills, are the same for everyone. Starting with the first refresh, opposing Dragons vary over time and are generated randomly, while their strength is adjusted based on that of the Trainer's Dragons. Once a mine is (re)conquered by the Trainer, it cannot be re-battled until after being retaken by the enemy.

Mines are non-functional in Heroic Mode.

See Normal Chests and Heroic Chests for a complete list Chests are given after a specific quest on the Campaign Map is complete. These chests do not include Scrolls or experience points, as with chests given right after winning a battle, but can include Gems. The VIP Status has no effect on chest contents, only on chests immediately rewarded for winning battles.

Retrieved from "https://www.dragon-mania-legends.wiki/w/index.php?title=Quests&oldid=103663"
Categories:
Cookies help us deliver our services. By using our services, you agree to our use of cookies.