Emerald Wars is a Clan Event in which two participating Clans compete to control of 5 Emerald Mines.

Two competing clans fight for the control of 5 Emerald Mines throughout the event. All mines produce emeralds at a different rate every minute for the controlling clan, and the ultimate goal is to collect more Emeralds

than the rival Clan. The Clan that holds a highest amount of emeralds at the end of the event is the winner.

Clan Dragons can wield special powers during events. The effect can be improved by earning Power Boosters prior to an event by completing Clan Quests and powering up the Dragons. Striker

Emerald Wars runs for 4 days. All participating, qualified Clans in the game are split into groups of two, in accordance with the league they are currently in.

every minute for the controlling clan. The Emeralds earned from this production and Emeralds rewarded from battles is what makes up the Clan's Score. Mines controlled by the Trainer's Clan are shown with a yellow background notification above the mine, whereas those controlled by the opposing Clan have a red background notification above the mine. Each mine has its own Battle Score counter and it is controlled, at any given time, by the clan with the higher Battle Score. Clan members increase the Battle Score by attacking mines and defeating Trainers from the opposing Clan.

Trainers must select the Dragons to take into battle, then choose from three opposing Trainers with different levels of difficulty (as in Arena Battles). If the Trainer is victorious, they will be awarded Battle Points for the mine's Battle Score and a number of Emeralds

for the Clan's Score. The points rewarded increase with difficulty and earning of win streaks. Once enough battles are won to overtake an opponent-controlled mine, the red background notification color above the mine changes to yellow, indicating the Trainer's Clan now controls it. 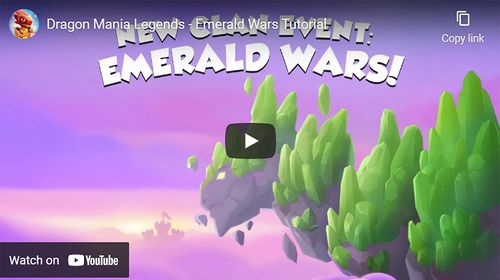 Click the image above to view the official video on Youtube.  See Emerald Wars for more information

Similarly to Arena fights, one opponent has to be chosen out of an Easy, a Medium, and a Hard rival. Defeating Hard opponents gives higher Battle Score but it’s also more challenging. Once the opponent is chosen the fight begins and the opponent team needs to be defeated to receive the reward for the fight. Opponents can be refreshed for 5 gems

.
The Battle Score calculation is based on the following parameters:

All Battles and the outcomes are available in the Battle Log, accessible via the

is the energy used in Emerald Wars, a Clan Event, each time a battle is fought. Every player has 6

at maximum as a base amount, and attacking a mine costs 1 Emerald Energy. If a Trainer's Dragon participates in a battle for controlling an emerald mine, it needs to rest for a certain amount of time before it can fight again (it can be used outside the event while resting). The resting time can be skipped with Revitalization Tokens earned completing regular Clan Quests.

Revitalization Tokens are used to fill Battle Energy for Emerald Wars. These tokens revive resting, battle-tired Dragons to go back into battle immediately, instead of waiting 8 hours. Resting time can also be skipped in exchange for 20

, they appear only in the Emerald Wars interface. Unused tokens expire when the Clan Event ends. 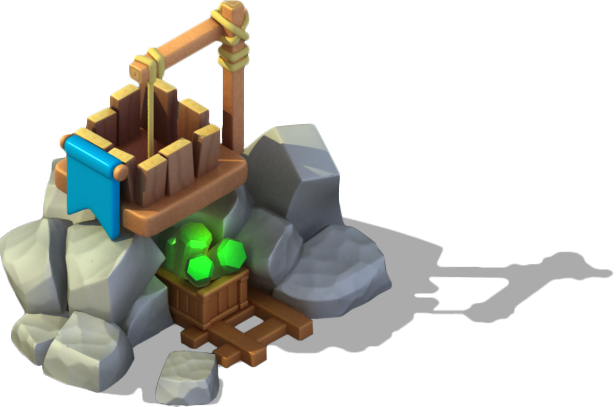 The number on top of the mine shows the maximum level allowed for the dragons attacking it.

Points are earned for each match completed, win or lose. If a Trainer loses the battle, they will only receive 5 points in total. If a Trainer wins a match, they will receive a base of 10 points plus any bonus point earned from the battle. 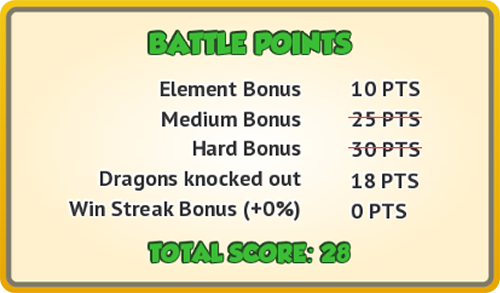 Bonus points are added based upon the difficulty of the battle, the level of the opposing Dragons and the Trainer's winning streak. 10 points are given for winning a match.

Win Streak - Bonus points are given for defeating multiple opponents in a row within a given time frame. The bonus points increase with the Win Streak and are added to the Trainer's score. Each time a match is won, a win streak is started or continued. If a match is won in the next 31 minutes, the streak will continue. Consecutive victories, up to the 15 win streak, in addition to the bonus to the battle score from the next victories, earn a reward, which depends on the Clan League.

Retrieved from "https://www.dragon-mania-legends.wiki/w/index.php?title=Emerald_Wars&oldid=97644"
Categories:
Cookies help us deliver our services. By using our services, you agree to our use of cookies.