Team up with Gameloft and three awesome Influencers to support one of the largest and oldest humanitarian aid organizations focused on fighting global poverty:
Care International

Trainers had to perform various tasks to earn Flowers with a maximum limit of gatherable Flowers of 100 per task per day.
There was no limit to how many Flowers a Trainer could donate. These were used to vote for one or more out of the 3 different YouTubers, each having represented a different Dragon. The Trainer could just gift all currently collected

to one of them, with a minimum amount of 50 Flowers. The more Flowers the YouTuber's represented Dragon received, the higher the Rarity of the Dragon became. At the end of the event 100% of the revenue of the bought Flowers and packs was donated to CARE, with a minimum donation of €50,000 from Gameloft. In addition to this, all Trainers who donated the initial 2,500 Flowers and thus reached the first milestone were awarded with all 3 influencer Dragons in the week after the end of the event. 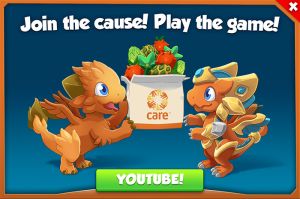 Retrieved from "https://www.dragon-mania-legends.wiki/w/index.php?title=Stronger_Together_(19/04/08)&oldid=97720"
Categories:
Cookies help us deliver our services. By using our services, you agree to our use of cookies.