This article is about the currency. For other uses, see Gold (disambiguation). 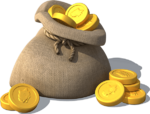 Gold is the standard in-game currency. It is earned and used in various ways. The amount of Gold a user can hold (on the main interface) is limited to 2,147,483,647. After reaching that amount, additional Gold is sent to the Gold Purse

. The purse can hold unlimited Gold and can be claimed whenever needed. The main method for obtaining Gold is collection

from the Habitats in which Dragons reside. There are, however, many other ways to earn Gold.

The amount of Gold received when selling

certain buildings and Dragons depends on a series of factors.

The following Dragons do not follow the formula and thus have their own selling price:

Retrieved from "https://www.dragon-mania-legends.wiki/w/index.php?title=Gold&oldid=98056"
Category:
Cookies help us deliver our services. By using our services, you agree to our use of cookies.