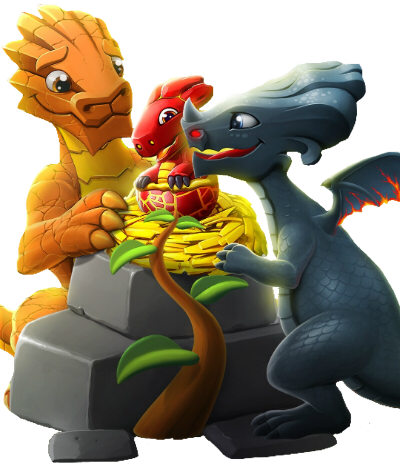 Breeding is the main way to obtain Dragons. Breeding is done by pairing two adult Dragons (Level 4 or higher) in the Breeding Den, the only place where Dragons can breed. The amount of time it will take to breed a Dragon is determined by the Elements and type of the two Dragons being bred together and the Dragon which will be produced from that breeding. Usually, the longer the time it takes to breed, the rarer the Dragon will be. Dragons with more advanced Elements and a higher rarity will take more time to breed and incubate. Breeding times can vary from 30 seconds for a Fire Dragon to 4 days for Divine and Ancient Dragons, and are affected by the VIP Status and various other factors.

Dragons that can be bred at all times will always be found in the Main Shop. Some Dragons are not normally obtained through standard breeding. They may be awarded through events or a variety of other methods, or be offered for limited-time breeding, as in the case of the Dragon of the Week and the Dragon of the Month. Additionally, Chronos, Boss Dragons and Clan Dragons can not be obtained through breeding.

When breeding two Dragons, there is usually no guarantee of what Dragon will be obtained. The exception is when there is only one possible outcome for the resultant Dragon, such as when using two single-Element Dragons that are of the same Element. An example of this would be to breed Fire Dragon + Fire Dragon, which can only result in the breeding of a Fire Dragon. Baby Dragons will usually inherit one or more Elements from each parent with the exception of Legendary, Divine and Ancient Dragons. Another exception is when using a Double Egg Relic, which gives the Trainer the possibility to choose the outcome between two randomly-picked possible outcomes for the respective combination for a period of 12 hours for all ongoing breedings during this time.

Breeding the same pair of Dragons multiple times can lead to various results since the specific Dragon that will hatch is randomly chosen based on the available Elements of the parent Dragons. Breeding two Dragons of higher levels will increase the chances of producing a Dragon of higher rarity. Breeding outcomes for a specific Dragon or Dragon of higher rarity may require many breeding attempts. The only exception is for Guaranteed-Breedable Dragons. These are the only Dragons that can result from certain Elemental pairs. The Possible Results option of the Breeding Den is a helpful tool for determining what the outcome of a specific breeding may produce.

Legendary, Divine and Ancient Dragons act as wild cards for breeding, but they pass only one Element from the ones which the user has unlocked by leveling up. Only Base Dragons and Bi-Elemental Dragons (with the exception of the Sunflower, Mercury, Lightning, Magnet and Emperor Dragons) can be obtained by breeding together two Legendary, Divine or Ancient Dragons, regardless of whether either parent has any of its secondary Elements unlocked.

The Element passed by one of the parents can be any Element in the game, regardless if the parent possesses it or not (awoken or unawoken), as long as the Trainer themselves have unlocked it through their level.

Additionally, these Dragons also do not follow the breeding principles when it comes to being bred, as Legendary Dragons can either be obtained through specific combinations or through a limited-time breeding event while some Divine and Ancient Dragons are only extremely rarely made breedable.

When Legendary, Divine or Ancient Dragons are used as part of the combination for any form of breeding (for example, Dragon of the Week, Dragon of the Month etc.), they do not need to have their secondary Elements awoken in order to have a chance at breeding the respective Dragon.

Breeding VIP Dragons is done the same way as breeding Normally-Breedable Dragons, the difference being that the Trainer needs to be a certain VIP Level before these Dragons can be bred or even purchased. Additionally, they can only be bred while the VIP Status is active, regardless if the Trainer has the necessary VIP Level. Once a VIP Dragon has been bred, it is removed from the possible outcomes of any breeding combination, meaning it will only be available for obtaining through purchasing or through any methods other than breeding.

There are hundreds of different breeding combinations to get various Dragons in the game. Therefore, some Dragons can be bred from more than one pairing combination. There are, however, a few Dragons that can not be bred together. These are:

Furthermore, there are some hybrid Dragons for which a Single-Element Dragon can not be used when trying to obtain them. They can only be obtained by using hybrid + hybrid breeding combinations. These are:

Additionally, the above Dragons are the only ones part of the specific combinations for obtaining Breedable Legendaries.

See Breeding Den for information on upgrading it

Limited-Time Breeding is any breeding event or occasion whose sole purpose is to successfully breed one or more Limited-Time Dragons in the allotted time with the Dragon(s) being the reward.

are special items that are activated instantly upon obtaining. They offer the Trainer the opportunity to breed a Limited-Time Dragon for either an indefinite or temporary period of time. These Dragons follow the same breeding principles as Normally-Breedable Dragons.

Five Breeding Tokens are obtained from the Dragon Collector Leaderboard while others are obtained through events. Once a token is obtained, a confirmation screen will appear giving the Trainer the option to close it through the   ok   button or to immediately proceed to breeding the Dragon through the Go To Breeding button. If a token is obtained for a Dragon which had already been activated through another token, the period of time, during which the Dragon is available for breeding, will simply be extended.

Once a Dragon with a permanent Breeding Token has been bred, such as those obtained through the Dragon Collector Leaderboard, it is removed from the possible outcomes of any breeding combination, meaning it will only be available for obtaining through purchasing or through any methods other than breeding.

Dragon of the Week[edit source | VE]

See Dragon of the Week for more information 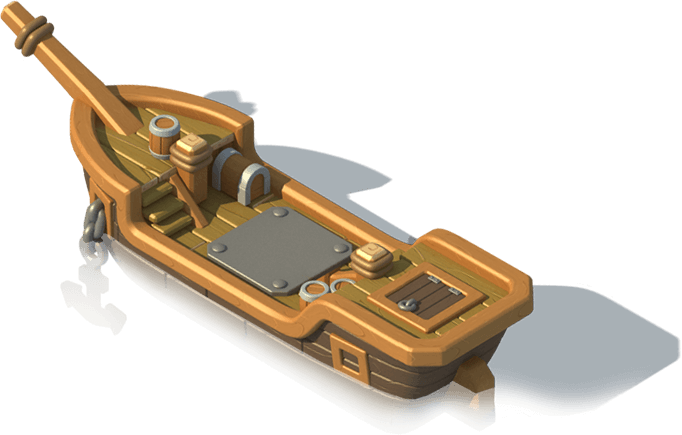 For the duration of one week, a limited Bi-Elemental or Tri-Elemental Dragon, classified as Rare or higher, is made available for breeding through the use of two specific Dragons.

In extremely rare cases, a Legendary, Divine or Ancient Dragon can be made available as a Dragon of the Week.

Dragon of the Month[edit source | VE]

See Dragon of the Month for more information

For the duration of one month, a limited Legendary Dragon is made available for breeding through the use of any Dragons having together four specific Elements. For the duration of a very short period of time, usually only a few days, a Dragon is made available for breeding through the use of any Dragons having together a given number of specific Elements. Currently, the only Dragon to have been flash-breedable at some point is the Lantern Dragon.

Once two Dragons are sent to the Breeding Den, they will breed for a period of time to produce one egg. Eggs need to be incubated in the Hatchery until they are ready to hatch. Once the incubation period is complete, the baby can hatch from its shell and be placed into one of the Habitats or sold on the spot.

This only applies to the Elements of a Dragon that do not require awakening. Thus, only the base Element applies to all of these Dragons because their secondary Elements need to be awoken. As such, all Dragons with that base Element have the same breeding time, regardless of their other Elements.

First Example
The Classical Dragon is classified as Common and possesses the Light & Wind Elements.

Second Example
The Storm Dragon is classified as Epic and possesses the Wind, Energy & Void Elements.

The following Dragons do not follow this formula and thus have their own breeding time.

See Time Reduction for the Breeding Den for more information

Aside from an active Level 2 VIP Status, which reduces the breeding and hatching time by 20%, any ongoing breeding time is also reduced by 6 hours whenever Chronosian Seals are forged or Chronos's power is used, and by 5 minutes for each Timer Boost received from visiting Trainers. Additionally, any one individual breeding is reduced by 8 hours whenever a Relic of Breeding is used. The entire breeding time can also be sped up in exchange for Gems. Lastly, the Trainer might be offered videos to watch in order to reduce the ongoing breeding time whenever the

icon appears above the Breeding Den. The option reduces the time by 30 minutes every time it is used.

This category has the following 3 subcategories, out of 3 total.

Retrieved from "https://www.dragon-mania-legends.wiki/w/index.php?title=Category:Breeding&oldid=101634"
Categories:
Hidden categories:
Cookies help us deliver our services. By using our services, you agree to our use of cookies.