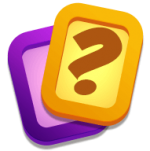 Sugar Rush runs for 4 days when all participating Clans in the game are split into groups of maximum ten, in accordance to the league they are currently in. These groups then compete against one another to win the race. The event was introduced in Update 4.5, debuting April 15th 2019, in which Clans can participate only if they qualify by having a Clan Dragon fully hatched.

Clan Dragons can wield special powers during events. The effect can be improved by earning Power Boosters before an event by completing Clan Quests and powering up the Dragons. Gravelis 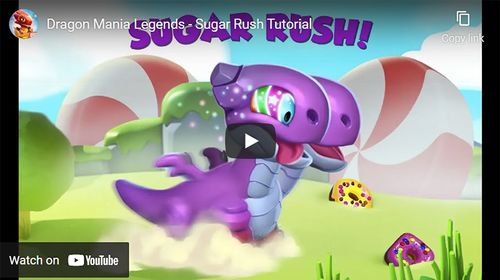 Unlike the individual Clan Quest boards provided in The Great Dragon Race, during Sugar Rush events clan members share the same quests that are listed on a shared Clan Quest Board. For the duration of this event, Clan Quests, in addition to the regular rewards of Clan Coins and Clan Experience, will also award Shakes. The number of shakes given depend on the particular quest. 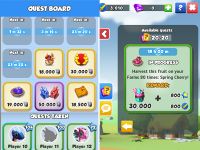 There is a limit of 20 quests that each member can complete during an event to earn points for the Clan Event. However, the Trainer can opt to complete up to 3 more quests at a cost of 20 Gems per quest after the limit is reached. Quests can only be completed one at a time.

Available quests indicates how many total quests Trainers can complete during the current Sugar Rush event. Clan Leagues differ in the number of available quests, higher Clan Leagues having more quests available for completion. To select and start a quest, Trainers can tap a quest to see its details: the required action, how many times it needs to be done, the time limit and the score value.

A new quest takes 1/2 hour to spawn, which can be skipped with Gems by pressing Skip

to speed up the process.

Quests not completed within the time limit have to be trashed. Already started quests can be trashed at any time, however the turn for the trashed quest is then lost along with the opportunity to contribute to the Clan score.

Once a quest is complete, to receive points for it and to be able to start another quest, the rewarded Shakes must be fed to the Clan Dragon by dragging it to the Dragon's mouth, allowing it to move forward in The Sugar Rush Race.

Each quest has a different rarity and thus a different difficulty level, as well as a time limit for completion. The quests given to the Clan are random, and the chances for their rarity varies according to the league they are in. Higher clan leagues will have a higher chance of spawning Epic or Legendary quests and a much lower chance of spawning Common quests. The more rare a quest is, the more challenging it is to complete and the higher the points awarded for its completion.
While a Trainer is actively doing a Legendary quest or a Legendary quest is present on the shared Quest Board, no other Legendary Quest will spawn.
Selecting Gravelis as active Clan Dragon overrules this.

There are three different sources that reward participating Trainers with prizes, namely progress or milestone rewards, the MVP reward, and the leaderboard rewards. All three depend on the league the participating Clans are in. Clans in higher leagues will receive better rewards, but the requirements will also be higher.

The most active member of the week is awarded

status and a certain amount of Clan Coins, depending on the league their Clan is in. Members can see the current MVP rankings by going to the menu where recipes can be cooked and pressing the MVP

button. The rankings can also be accessed by opening the Clan interface, selecting the

option, then pressing the Clan Event
MVP tab. The latter option can also be used when there is no ongoing Clan Event, while the former can only be used during an ongoing event.

The leaderboard can be accessed by going to the menu where recipes can be cooked and pressing the Event
Leaderboard button. Here, the current score of each Clan can be seen, the time left until the event ends, each Clan's currently active Clan Dragon and their position on the racetrack, the points needed for each milestone, and the i and Rewards: buttons. Pressing either of these two will bring up the leaderboard prizes, but the former button disappears if the Clan has scored the minimum needed to qualify for the leaderboard, as well as the text in the left of it, and is replaced by the

The rewarded card pack gives Dragon Pieces only for Clan Dragons, except Chip, and the amount is in relation to the Clan's final ranking. When claiming grand prizes, it is possible to receive cards for Clan Dragons already owned. As only one of each Dragon can be owned, the applicable card will automatically be compensated for by being replaced with a certain amount of Clan Coins if this occurs. Thus, 50 are given for Ruptia, 125 for Striker, 200 for Gravelis, 350 for Amoura, and 500 for Brimstone, Kutter and Boone.

The amount of Food and Gold rewarded depends on the Level Modifier.

Retrieved from "https://www.dragon-mania-legends.wiki/w/index.php?title=Sugar_Rush&oldid=103866"
Categories:
Cookies help us deliver our services. By using our services, you agree to our use of cookies.